Stories Behind the Apps: Crowman & Wolfboy 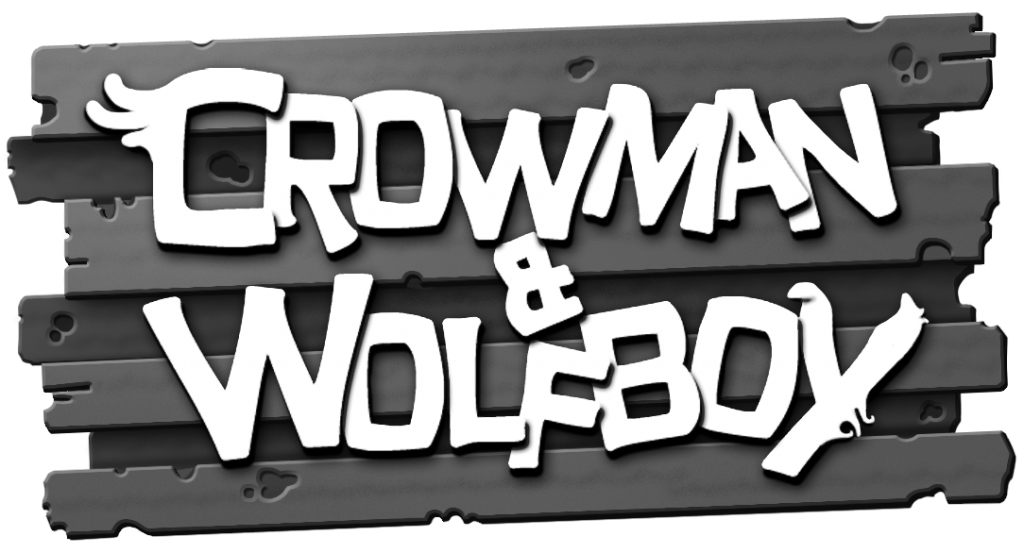 Tell us about your game! Crowman & Wolfboy is an action/adventure game about two shadow creatures searching for happiness in a dreadful world.  In attempting to find a mysterious race of creatures, called "humans", and to escape their own nature, Crowman & Wolfboy begin their journey to flee the shadows. An ancient Darkness is displeased with their intent to leave and rises up in pursuit.

Use intuitive swipe controls as you navigate through dangerous terrains and attempt to escape the ever persistent Darkness. Collect light orbs throughout the levels to knock the Darkness back. Maneuver past hazardous obstacles and enemies by learning new abilities as you progress. Along the way you'll collect hidden items, unlock ancient knowledge, save innocent babies and even travel through space and time! 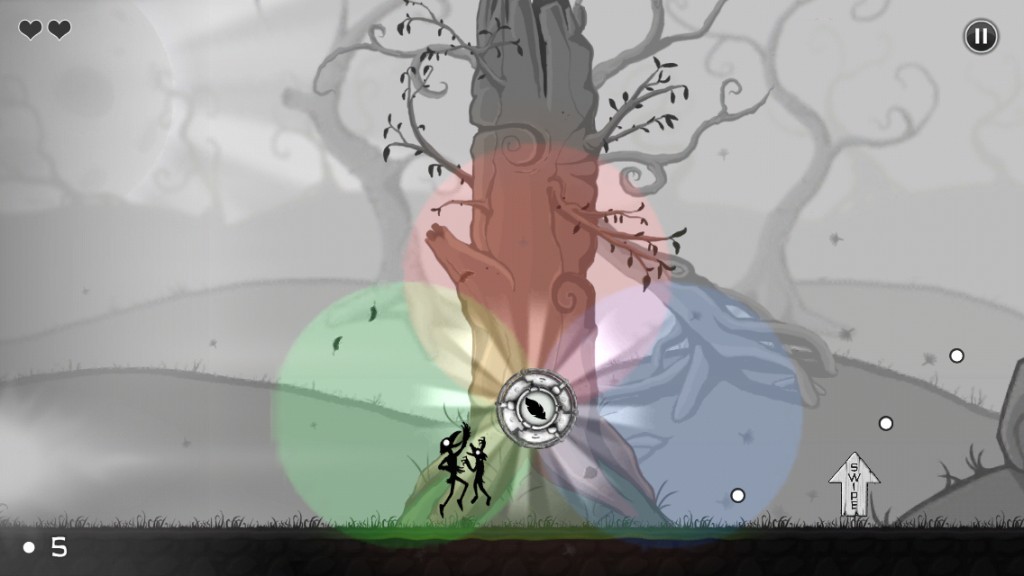 The game is currently out on iTunes and will be coming to Android soon. We've also been Greenlit to release on Steam – that won't be going live until next year (though we may do Early Access this year). We are still developing content for Crowman & Wolfboy and are releasing it in parts or episodically.

How is the app different from similar games? Our goal in creating Crowman & Wolfboy was to sort of fill a gap we saw in the mobile market. There didn't appear to be many "hardcore"/challenging games that where story driven. I believe we succeeded at this goal. I feel like Crowman & Wolfboy can stand out from similar apps because it's much more of a "game" and less of an "app-game", if that makes sense. So the story is pretty deep and the world is quite large. A lot of time went into creating the artwork, animations, music and sound. A lot of attention to the details. Our approach to designing C&W was to look at it as a game first and an app second. As a result, I feel like we will have a mobile game that has far more depth and content then most other mobiles games out there. 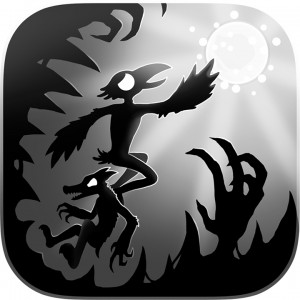 Tell us about the design. The app icon is a condensed depiction of the games essence and was designed to showcase the core elements of the game in a single image. You have the characters – Crowman & Wolfboy jumping (an action you perform frequently), the Darkness chasing them and a light orb they are reaching for.

The user interface we’ve actually redesigned a few times, as the game content expanded. The latest iteration of the UI is built to be the most convenient for users by leading them forward with visual cues and keeping relevant information right in front of them. One thing we wanted to avoid was having to navigate through too many pages. This was a challenge because our game has so much content. So some pages had to have a good amount of buttons on them; the key was to consider the priority of each button and utilize basic visual design  to make higher priority buttons stand out more.

When it comes to the in-game HUD (or Heads Up Display) we wanted to keep the screen as clear as possible. Originally, Crowman & Wolfboy was built using a virtual joystick on the screen. To simplify things, the decision was eventually made to axe the joystick in favor of auto running. This not only helped to clear up the screen but also to give the game a much smoother rhythm. The only permanent HUD elements that remain on screen are the players health (represented with hearts) and the pause button. Any other HUD elements, such as number of collected orbs, attack meter and tutorial text, appear only when they are needed to be seen 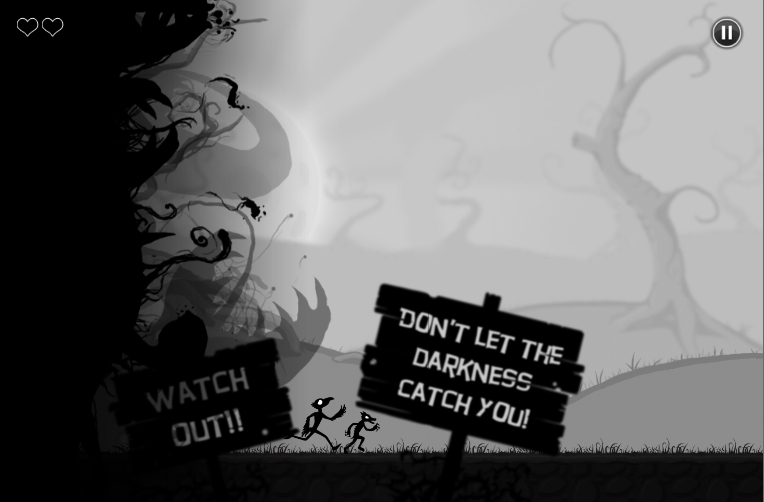 What tools or resources assisted you in building the app? Our team uses the Unity3D game engine. It’s a great development tool and I always highly recommend it to anyone looking to get into the trade. The best part is that there’s a free version! Unity handles all the back end stuff like rendering, loading, running code and so on. Having a game engine as opposed to building your own saves on a massive amount of time. Instead of wasting time building basic framework, development can be focused more on the design of the game itself.

Another tool we use is TestFlight. It’s a way we can send out builds of the game, remotely to different testers. This is especially useful because playtesting is an integral part of development and TestFlight helped to make it a more convenient and expedited process.

What lessons did you learn and went right/wrong with the release? Before we began working in Unity, we were using a different game engine. A lot of progress was made with that first engine and despite it's obvious flaws, production continued because we had already invested time and money into it. That was a mistake, we should have pulled the plug on it as soon as the flaws began to show; would have saved ourselves countless hours of work. The switch to Unity was painful for that reason (throwing away so much work) but ultimately the best choice we could have made. Unity was leaps and bounds beyond what we were previously using. It actually has good documentation, an awesome community of developers, and it just worked… all things the former engine was lacking. Two lessons we learned from the switch: 1) if something is not working, it's probably better to come up with a new solution rather than wasting time trying to work around a broken system, and 2) the hard reality is that sometimes hard work gets thrown out. It's never easy to lose progress but the best thing you can do is to look forward, not backwards, and keep on trucking.

So, the engine switch I talked about was one of the biggest things that went wrong. During that period of time we were also developing another game, which we eventually canceled when we realized the team was just too small to work on two projects at once. As our focus adjusted to Crowman & Wolfboy 100% we ran a Kickstarter campaign to raise a little funding for software. The campaign was successful and we even past our modest goal of $4,000 and raised just above $6,000 (this was at the tail end of 2011, before the big Double Fine project that started the KS storm). Of course after Kickstarter/Amazon fees and backer prizes, the money earned for development was much less but this helped us to get some of the software we needed. The funds also allowed us to showcase our game at PAX East 2012.

A big lesson we learned through the process of developing our first independent game – don't give a release date until the project is getting close to being done. The date always changes. Our original release window was the end of 2012. Crowman & Wolfboy launched in October of 2013. Not only did it release much later but we also had to break up development of the game into chucks and release it that way. The decision was made to break the game up into  parts so that we could get content out there to fans and so that we could hopefully pull in more money to continue development. We were over ambitious with our initial goal to say the least. When our whole team has to work around full time jobs and build the game in their free time, progress is hindered in a big way. Things take a lot longer than they would if we were developing full time.

With releasing, there were a lot of things that we didn't figure out until it was too late. One was that developers are supposed to send a Roadmap to Apple, outlining their app features. This is crucial because getting featured by Apple is everything and you can't get featured if they don't know about your app. Think of it like being on a store shelf as opposed to in the back stock room – people go looking for your game unless they know it exists, and no one knows your game exists if your an indie dev without connections and/or the right resources (i.e. most indie devs). So that definitely hurt our launch numbers.

Going to conventions and getting your name out there is also an important part of the process. So we've tried to do as much of that as we can with our small budget. Recently Crowman & Wolfboy was officially selected for the PAX East 2014 Indie Showcase, Too Many Games 2014 Indie Showcase and nominated for "Best Mobile Game" in the Indie Prize Showcase of Casual Connect USA 2014.

We learned a lot through working on Crowman & Wolfboy about producing a game, running a business, working with app marketplaces, marketing, managing a small team and so on. Wither Studios is much stronger now more than ever. I think our fans will be impressed with the new content coming for Crowman & Wolfboy and I know that our future projects will be even more amazing. 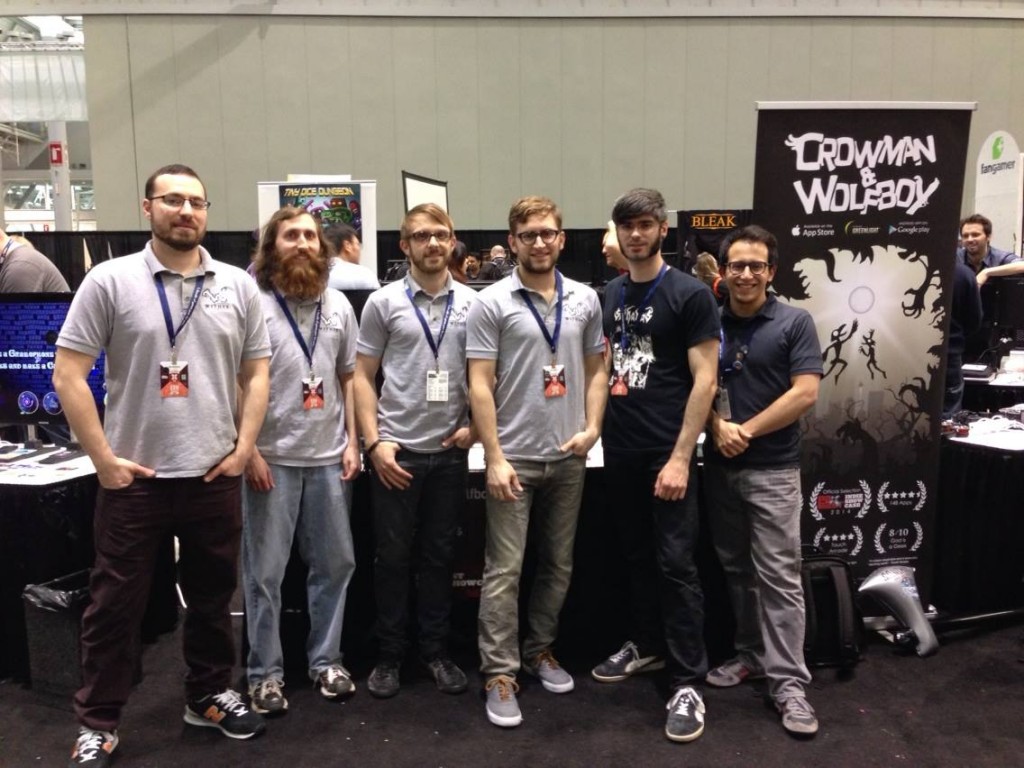 Who is on the team and what are your roles? As a fairly small team for a games developer, most of us take on many roles. For myself (Steve Gabry), I'm the Creative Director, Artist, Writer and Project Manager. Brian Turner is our Lead Programmer, Web Master and  Local Genius. John Cobb is our Technical Art Lead, Lead Animator and Artist. Doyle Daigle, II is our Artist, Composer and Sound Engineer. Mike Thomas is our AI and General Programmer. CJ Kuehn is our Artist and Animator. And last but not least, our newest team member is Joe Edelsack, who is our Quality Assurance Lead and Social Networking Lead. Together we are Wither Studios; Pittsburgh's own Indie Developer.

What were you doing prior to building the app? Before Crowman & Wolfboy we were working on a different game that was eventually canceled. The game was a 3D adventure with some horror and sci-fi elements. I don't want to say too much about it, it's a project we may come back to sometime in the future. During this time and prior, we were team building. It was the early formation of Wither Studios, we had a few lineup changes before C&W.

What other apps or games inspire you? To be honest, I don't use very many apps. I know some of the guys on the team do. I'm more of a console and PC gamer but there are a few games I have enjoyed on my smart devices. I really like Superbrothers Sword & Sworcery and Machinarium. I tend to like the artsy, indie stuff.

As far as inspiration, we did look at many apps during the process of figuring out the controls for Crowman & Wolfboy. So there are probably a handful of game apps that influenced the mechanics and GUI designs. However, our inspiration comes from mostly retro games like Mario, Earthworm Jim, Metroid and games like that.

Head over to the Apple App Store to download Crowman & Wolfboy.

Hey you app devs!  Wanna be featured like our friends at Crowman & Wolfboy? Be sure to check out http://www.powerslyde.com/get-discovered.